Where it all began

Ed’s most popular books are, without doubt, the five-novel Fleet of Worlds series — epic space opera, every one. They’re collaborations with New York Times bestselling author (and winner of darn near every SF award worth mentioning) Larry Niven.

You’ll find all the covers, plot synopses, and a favorite blurb per title over on the bibliography page. On this page, rather than repeat, let’s muse — sans spoilers — about why these books have caught on.

To start, the Fleet of Worlds series complements Larry’s wildly popular Ringworld series. Among readers familiar with that series, or with Larry’s overarching future history, Known Space, that may be all the explanation necessary ….

Which is not to say any knowledge of Ringworld is needed to enjoy the new series. Fleet of Worlds takes place centuries earlier. Only Fate of Worlds, the fifth and final “of Worlds” book, opens after Larry’s four Ringworld books — and concludes both series. 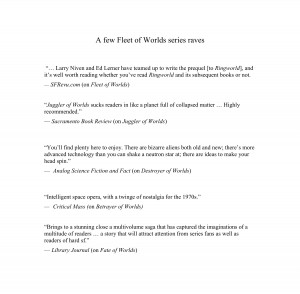 Second, books across the Fleet series are widely acclaimed — independent of Ringworld. The biblio page already offers a link to Ed’s very favorite blurbs, one per title — so at left you’ll find his second favorite blurb per title. We can continue this all day 😎 (but we won’t).

Other recognitions? Fleet of Worlds, the book that started the series, was: a Sci Fi Essential title (from back in the day the network was known as Sci Fi, not SyFy), a featured title of the Science Fiction Book Club, and a finalist for the prestigious Prometheus Award.

Not to mention that the series is popular world round, with (one or more books) translated into Chinese, Czech, German, Greek, Italian, Korean, Polish, and Russian.

Finally, Ed’s authorial blog, SF and Nonsense, has devoted several posts to the books of the Fleet of Worlds series — kicking off many a discussion among readers (with the author chiming in, too, of course). Five of the ten all-time most viewed posts at SF and Nonsense are series-centric:

Have you read some of the books? Maybe you’re just curious about them. Either way, why not head over to SF and Nonsense and join the conversation? You’ll find a blog label specific to each title, plus labels for many series-related broader aspects of Known Space.

I'm a physicist and computer scientist (among other things). After thirty years in industry, working at every level from individual technical contributor to senior vice president, I now write full-time. Mostly I write science fiction and techno-thrillers, now and again throwing in a straight science or technology article.