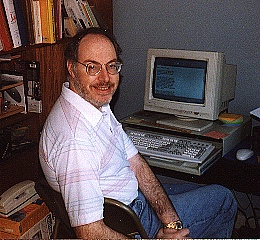 Ed takes a writing break (in the Dark Ages, judging by that monitor)

(2023) Ed visits the Yeah Uh-Huh podcast to discuss (mainly) his 2021 novel Déjà Doomed. The podcast is here, on Spotify.

(2022) JVC Art Studio invited Ed to the podcast nominally to discuss The Best of Edward M. Lerner — but the delightful conversation as often dealt with the practicalities of exploring Mars, how Ed got into writing, other of Ed’s books, past and forthcoming, and more. Check it out here.

(2022) Ed reports that this appearance at The Protagonist Speaks was one of his most fun interviews ever.

(2022) Ed found himself under the (benign) glare of the Science Fiction Trading Card Spotlight.

(2022) Ed was interviewed about The Best of Edward M. Lerner for the Paul Semel’s popular-culture blog. How the new collection came about. How its stories were selected. What to read next.

(2022) Ed appeared on The Douglas Coleman Show, where the wide-ranging conversation covered, among other things, Ed’s writing career, the Apollo Moon missions, prospects for exploring Mars (touching on his own forthcoming novel), and — of course, his latest book, The Best of Edward M. Lerner. Here’s the video, on YouTube.

(2022) Lurking for Legends hosted Ed for a wide-ranging live video chat about his writing career and many of his books (including coming books). It’s available on YouTube.

(2022) In quite the change of pace from the more usual genre-oriented venues, Ed had an extensive discussion with Authority Magazine (“devoted to sharing in-depth interviews, featuring people who are authorities in Business, Pop Culture, Wellness, Social Impact, and Tech). The dialog’s main theme was “How To Create Compelling Science Fiction and Fantasy Stories.”

(2022) Ed had a wide-ranging interview with author, editor, publisher, and blogger J.M. Northup. They discussed Ed’s career, literary opinions, and writing process, with nary a mention of his recent books. (There *are* looks ahead to forthcoming books.) Here’s the interview.

(2022) To start off the new year, Ed went on The Word Tour to discuss “The Science Behind the Fiction.” Naturally, a few other aspects of his writing also came up.

(2021) Ed returned to genre podcast Sci-Fi Saturday Night, to discuss the science behind the fiction. (He is a physicist and computer engineer, you’ll remember, not only a longtime SF author.) Read all about it on his blog post (“MacGuffins and starships and aliens, oh my!“), or go straight to the interview (“Irrational Numbers for Rational Science Fiction.“)

(2021) Ed returned to Southside Broadcasting (affiliated with Lincoln University, in the UK) to discuss the state of science and science fiction, prospects for the climate and encountering aliens, and so much more. The podcast version is here (Ed’s interview taking the first 35 minutes).

(2021) Ed did beaucoup interviews: on – among many topics — science fiction, the space program, his writing career, and the year’s new novel, Déjà Doomed. He maintains a growing list of these interviews on his blog (in a post headlined with what’s perhaps the best interview comment of all time) at Holy Crap! This is a great book.

(2018) Ed has a cameo appearance in The Washington Post. See “We crashed a science-fiction writers convention to ask about Trump’s ‘Space Force’ ”

(2018) Ed has an extended interview about Trope-ing the Light Fantastic on The Innovation Show — “an international show for innovators.” Stream the audio (48 minutes in toto) at “The Science behind Science Fiction with Edward M.Lerner: Augmented Humanity, AI, Superintelligence.” That is, if you didn’t catch the radio broadcast on Radio-Television Ireland ….

(2018) Ed is interviewed on the Analog blog about Trope-ing the Light Fantastic and its back story. See “Trope-ing Down the Alleyways with Edward M. Lerner.”

(2018) Ionisphere (the newsletter of the National Fantasy Fan Federation) interviews Ed in their February 2018 issue. Just search on “lerner”.

(2016) Is it the zombie apocalypse? Ed makes an appearance at Eating Authors?

(2015) Ed returns to Fast Forward: Contemporary Science Fiction for a TV interview covering the release of InterstellarNet: Enigma — and lots of other things. Watch it on Youtube.

(2015) Ed guest-posts at SF Signal about crafting believable mid-range futures (from a few decades out to a century or more from today) in “The Magic of Being Distinguishable from Magic.” He illustrates the process with background from the evolving future history that is his popular InterstellarNet series.

(2015) Ed guest-posts at SF writer Robert J. Sawyer’s very popular authorial/genre blog about “Beyond the Fermi Paradox” — and its explication in InterstellarNet: Enigma.

(2015) Ed is first among those interviewed at SF Signal for “MIND MELD: SF Stories That Predicted the Future — Or Didn’t.”

(2014) “The Near Future Is a Dangerous Place (for Writers, Too)” is Ed’s guest post on popular genre site SF Signal. It’s an essay on the perils of prediction — and on the mass-market paperback re-release of Energized.

(2013) Talk of the Town, on ABC affiliate TV3 (Winchester, VA), interviewed Ed about Energized. The interview aired on Saturday 11/9 and Sunday 11/10. Alas, the station folded soon after; their website — and with it, the interview — is no more.

(2013) Spec-fic website Upcoming4.me posts an interview with Ed as “Story behind Fate of Worlds by Larry Niven and Edward M. Lerner — Forty-two years in the making.”

(2013) The Winchester Star announces “Author wins award for magazine article.” (Sorry for the absence of a link; the online edition is available only to paid subscribers.) This is a rare article about Ed’s nonfiction writing. For Ed’s related post, see Faster than a speeding photon.

(2013) SF Site offers Fate of Worlds: An Interview with Edward M. Lerner. From their introduction: “… a single triumphant work of vivid imagination and colorful adventure, fraught with enough action, intrigue, surprises and human drama to satisfy any SF fan.”

(2012) The Winchester Star covers back-to-back release of Fate of Worlds and Energized in “Author pens new books; signing set.” (Sorry for the absence of a link; the online edition is available only to paid subscribers.)

(2012) Cover to Cover Book Beat (on Oregon radio) interviews Ed and Larry about the Fleet of Worlds series and, especially, about Fate of Worlds. (Or go straight to the podcast here.)

(2010) Over on SF Signal, see the EXCLUSIVE INTERVIEW: Edward M. Lerner covering the Fleet of World series and more.

(2010) “Worlds Colliding? That’s Nothing.” Ed’s essay in the Tor/Forge blog talks about Betrayer of Worlds and its relationship to Ringworld on the latter’s fortieth anniversary.

(2008) Sci Fi Wire (the news service of [what was then called the] the Sci Fi channel) interviewed Ed about Juggler of Worlds.

(2007) Ed presented “Computer Science in SF: It’s Not an Exact Science” at the Library of Congress, hosted by the library’s Technology, Science & Business Division and the staff’s Science Fiction & Fantasy Forum.

(2007) Ed’s autobiographical piece appeared in a section on dream jobs for engineers, in the online edition of Spectrum, published by the Institute of Electrical and Electronics Engineers.

(2005) Sparked by the release of Moonstruck, Ed was interviewed by the e-zine SFrevu.

(2005) Ed’s writing career became a matter of interest to his alma mater, the University of Illinois:

(2002) Ed’s writing career was highlighted in Jay Kay Klein’s “Biolog” in the February 2002 issue of Analog. This biography accompanied “Presence of Mind,” his first novella to appear in that magazine.