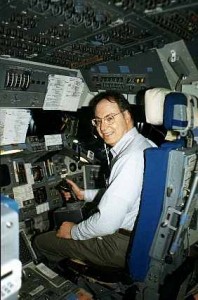 Ed at the Johnson Space Center circa 1996, ‘flying’ the space-shuttle simulator. The shuttle seems to have the aerodynamic properties of a brick!

I’m a physicist and computer scientist, among other things. After thirty years in industry, working at every level from individual technical contributor to senior vice president, I now write full-time. I write science fiction, techno-thrillers, and (less often) popular science.

Young visions of becoming literally a rocket scientist morphed into a degree in physics. Mid-degree, I had an epiphany: I was good at physics—but intuitive with computers. I completed the physics program and went straight on for a masters in CS. Physics was a terrific foundation for my newly chosen field—and later on, of course, for writing SF.

My computer career began at Bell Labs, where my assignments dealt with telephone switching systems and design for ultra-reliability. I moved to Honeywell, entering engineering management and an evening MBA program. The work at Honeywell involved automated building controls, real-time systems for which my Bell Labs training was tremendously valuable.

Completion of the MBA brought an unexpected “problem”: evenings and weekends to call my own. Suddenly, there was more time than I’d had in years for recreational reading. With more to read, I found much to criticize. My wife, Ruth, eventually suggested that if I thought I could do better, I should. 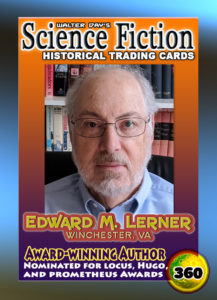 Significant traces of my Bell Labs and Honeywell experience appear in my first novel, but what’s most interesting in hindsight is how Probe foreshadowed my later career. By the time Probe appeared in print, I had changed employers, and my state of residence, twice. I was then newly arrived at Hughes Aircraft, one of a team chasing a large NASA contract. (We won.) While NASA personnel and settings play key roles in Probe (about which I’ll say only that it opens as a first-contact novel), it was completed before my first NASA encounter.

I never met any rocket scientists, but I did spend several fascinating years developing parts of the Earth Observing System (at the time, NASA’s third-largest effort, after the space station and the shuttle). I got to know an astronaut. I even flew the shuttle training simulator twice, which was great fun. Fortunately it was a simulator … I never got it back onto the “ground” in one piece.

The downside of NASA contracting was its impact on my writing. I squeezed in time for some short stories, two of which appeared in Analog. As my engineering management career took off, there was little room for hobbies. On the plus side, the next several years—in which few words of fiction were committed to electrons—produced a stockpile of source material for future stories.

I eventually left Hughes to explore the alien worlds of start-ups and the Internet bubble. 1999 found me restless in my day job. A sabbatical spent writing recharged my batteries—and produced a flurry of story sales (to Analog and Artemis). But in 2001, it was back to engineering management.

It turns out that the writing bug is persistent (or is the word I want pernicious?). After two more years in engineering and project management—more telecom and government contracting work—I took the plunge into writing full time.

For the next several years about half my writing was collaborative, from which the visible result is the five-novel Fleet of World series with Larry Niven.

I’ve also done nonfiction, putting a straight-science slant on the research that underpins both completed and upcoming fiction.  Many of my nonfiction articles and essays are collected, updated, and expanded in Frontiers of Space, Time, and Thought: Essays and Stories on the Big Questions (about one-third of the book is short stories illuminating the essays) and, most recently (2018), Trope-ing the Light Fantastic: The Science Behind the Fiction.

I like to think my technical background lends realism and depth to my fiction. Of course I also like to think that Windows won’t require daily rebooting and that chicken-fried steak is a health food. Perhaps you should sample my writing and form your own opinion …